CLICK ON THE DATES TO VIEW TOURNEY POOLS AND RESULTS

Check-in should be completed at the tournament desk no later than 1/2 hour prior to the tournament first scheduled match start time. A picture ID for each coach on the roster is required along with a medical release form for each player on the roster. A current SportsEngine roster is required to be signed and turned into the site director for use at the tournament. There is an 8 point penalty to the team's first match if the coach is not checked in 1/2 hour prior to the first match start time of the tournament.  In this time of COVID, teams may drop late.  If a team drops the format WILL CHANGE. All teams should be checked in, on site and ready to play in the first match of the day in the event a team does drop late.

Teams are straight seeded into divisions of 6, 7 or 8, depending on the final number of teams.

Pool play will be followed by a cross-pool match of the corresponding finish in the other pool of the division.

Ties will be resolved by the new USAV procedure adopted for 2020 (paraphrased as follows): 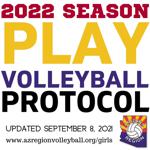 PLEASE REVIEW OUR PLAY VOLLEYBALL PROTOCOL PRIOR TO YOUR SCHEDULED TOURNAMENT.

BE SAFE AND HAVE FUN!

Please click here read our guidelines regarding facility use and team camps.

Back to Tournament Info Page for all Divisions