Back to Adult Division Home Page 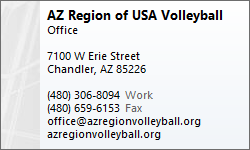 Team Check in starts at 8 am, Captain’s meeting at 8:30 am, Tournament START at 9 am

All Teams must have a minimum of 6 players on site by the 8:30 am Captain’s meeting for a prompt 9 am start.  The team that is off the first round must also be on site or risk being forfeited out of the tournament.  All it takes is a no show and the format changes and everyone is playing or reffing.  Also, we are paying for the courts by the hour so we do not want to drag out the tournament causing us to pay more for the facility than we have collected from the teams for facility use.

When teams leave a tournament early, it causes the remaining teams to lose matches they have paid for and count on.  Therefore, teams that enter a tournament and leave before tournament play is completed will be fined as follows: $100 for leaving early with no notification to site director prior to leaving; $50 for notifying the site director at the start of the day that the team will be leaving after pool play or before the tournament play is completed.  The fines must be paid before the team may play again or each member of the team is considered not in good standing with the Arizona Region - this will affect your ability to coach a junior team.  If a team leaves early at 2 or more tournaments, the team is no longer eligible to compete for the Region Championships.

Teams that withdraw from the tournament after entering will incur a $50 late withdrawal fee if the withdrawal comes on Friday (after formatting and printing has occurred).  A $100 no show fee will be imposed on teams that call after hours on Friday, any time on Saturday or do not show up on Sunday.  All fines must be paid before the team will be allowed to participate in another tournament.

2023 USA Volleyball Open National Championships will be held in Dallas, TX May 26 - 31.  Nationals information and link to US Open Tournament Info on the USA Website

Nationals Entry Process - Enter the team in AES and send your entry form and fee (or pay online) directly to USAV to arrive by the entry deadline. Send a copy of your entry form & AES roster to the AZ Region office (fax is fine...see below). The entry form and fee must arrive at the USAV office by the deadline stated above. Roster deadline for no charge is Thursday April 28, 2023

Open National Championships Reimbursement - In both the Men's and Women's Divisions the A/AA and B/BB teams will split into their respective divisions for the Region Championships. The A/AA Champion (or highest finishing team that is qualified and attending the Open National Championships if the Champion is not attending) will receive full reimbursement for their National's entry fee after the Nationals tournament is completed. The B/BB Champion (or highest finishing B/BB team that is qualified and attending Nationals if the Champion is not attending) will receive the balance of monies collected from each tournament entry fee as a reimbursement. To qualify for the reimbursement of fees the team: 1. Must have played in at least 4 regular power tournaments 2. Must consist of at least 80% of their original roster (if playing in the club division) or 80% Arizona Region members (if playing in Open or Master's Divisions).

Link will take you to USA Volleyball's Adult webpage.